We are back! Today Matt Comas tells you the story of Caudron C.600 in service of French Air Force during WW II, along with a full build from Régis Biaux.

The Caudron C.600 Aiglon in the Armée de l’air

As soon as the SBS team told me that they were working on the Caudron C.600, I was really happy to help them to create a painting guide as accurate as their kit.

The Caudron C.600 was produced before the war (around 200) for the civilian market and only 15 were ordered by the Armée de l’Air in 1938 as light training airplane.

After the outbreak of the war, in September 1939, most of the remaining civilan planes available in France (metropolitan territory) pass threw the requisition commission and became part of the Armée de l’air. They received a military registration in “W” (it’s not the case for all civilians requisitioned planes). By this way, military Aiglon could be identified by four numbers !

As we gonna see later a fourth one will be added in school !

Unfortunately, the military registration is not a continuous serie linked with initial numbers.

As we can imagine, clearly identify a plane is very hard because it is never the same number written in archives documents….

After their requisition, Aiglon where repainted and some of them still have their civilian registration and some others are only identified by their military one…

– 25 are “in the Army” which means that they are on the front line. For a such light plane, they were of course not in fighting unit but used by very small liaison unit called “section estafette”. They have to transport orders, mail, spare parts, etc. for the fighting unit and command structures (mostly recon ones).

Around 100 units of this type were created in September 1939 and each one have 3 reservist pilots and 3 civilians planes on strenght so may be eight of them have Caudron Aiglon. This units were disbanded in January 1940.

– 18 Aiglon are in training school

– 12 are in test centers and stock

For an easily and comprehensive fact, the C.600 were given to only one school for reason of maintanance.

It was always written that they were given to the Agen school which is complety wrong.

They were in fact used by the EAP (Ecole auxiliaire de pilotage – Auxiliary pilot school) n°12 of Royan. At the end of 1939, this school have 17 C.600 in strenght and would receive 4 more in January. On May 24th 1940, this school fly to Agen and left this base for the city of Auch June 10th. Some of the Aiglon where left at Agen during this retreat.

Aiglon of the Royan school received a big white tactical number on the tail (smallest one known is “6”, the biggest is “31”) which are strictly not their serial number.

Unfortunately for us (again) all school archive documents refers to that tactical number or military registration and no document allowed us to make the link between this two numbers. 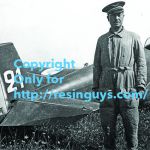 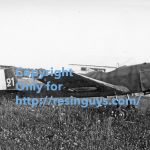 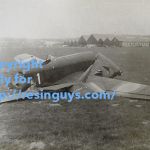 This plane flew from Royan to Agen the 23th May with lieutenant Laurent and stay their when the school left to Auch on June 10th.

On the available picture we can see that it was camouflaged and had strictly no marking on the tail and no cockade.

The unknown underwing registration (civilian F-XXX) can be seen between the two uncovered landing gear legs.

This civilian plane came from the « Club aéronautique de Bernay » (Aeronautic club of Bernay, in Normandy). After it’s requisition, this single seat plane (the front seat is covered) received a war paint and was part of the EAA 303 « section d’avion de liaison » (Armée de l’air warehouse n°303, at Saint-Cyr near Paris). On April 23rd 1940 this plane have an accident with captain Leduc (safe) and was entirely destroyed (as we can see on the picture).

The camouflage is very soft, and probably had a cockade on the fuselage. It has a white « 1 » on the fuselage and the civilian registration in the middle of the tail.